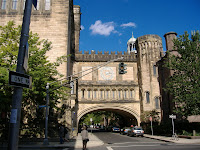 East Haven, Connecticut was established in the mid-1600s and was known for being perhaps the nation’s first iron works.  Although the community is old, it has remained relatively small (pop. 28,000) compared to its neighbor only 70 miles south, New York City.  Like many towns across America, East Haven witnessed a growth in Latino residents, comprising 7 percent of the total population that is until the City’s police force decided to implement their own attrition program.

Latinos in America number approximately 45 million, of which 76 percent are born in the U.S.  But, apparently that has not mattered for the predominantly Italian community whose Police Chief decided to conduct flagrant racial profiling of Latinos.  His officers have been serving as implementers of hate, hassling Latinos with unjustified traffic stops, false arrests, jailhouse beatings, and even towing their cars without warrant.  The situation has grown so severe that Latinos are making every effort to leave this picturesque community.
Restaurants and stores, which have been catering to Latinos on East Haven’s main street, are shutting their doors due to the owners and their clients being harassed.  One grocery owner was jailed for almost a week, charged with child neglect for having his 3-year old play in front of the store unsupervised.  Out of town shoppers have been threatened with arrest and deportation if they are unable to prove their citizenship.
About 100 years ago, Italians were the target of this type of discrimination and many would figure their experience would have led them to have a more tolerant view of immigrants.  But, Police Chief Leonard Gallo saw it differently, using his office and the city’s police as an opportunity to rid the community of the growing Latino population.  This is a population that includes immigrants and U.S. born.  Hiding behind the badge to implement racial profiling and decide who should live in East Haven and who should not, is a page from fascist regime of Mussolini.
Today, two-years after allegations the Police Department was abusing its authority, Chief Gallo is on administrative leave while the Justice Department conducts a civil rights investigation.  In addition, the FBI has opened a criminal probe that is making police and city officials nervous.  Neither acting Police Chief Gaetano Nappi or the town’s attorney, Patricia Cofrancesco, are talking to the media or the public about these investigations.  The town’s mayor, April Capone, revealed that the FBI was conducting an investigation, but has refused to respond to further inquiries.  And, of course, embattled Chief Gallo is denying the allegations.
There is no question that this historic community needs major reform, beginning with its leaders, and will need to take steps toward resolving its new recognition of being perhaps the most racist small community in the North East.  In the meantime, it is witnessing the exodus of what could have been their next generation of tax payers.
Posted by POP-9 Communications at 12:21 PM