Possible 'Second Round' of foreclosures coming

With Latinos losing homes across the nation, and with the Obama Administration pushing for more help for troubled homeowners, the Federal Housing Finance Agency says too bad for those losing their homes.  This is a clear case of Government for the Banks and by the Banks...call your legislators people! - The Perez Factor.

FHFA: Cuts to mortgage principal would not ‘meaningfully’ reduce foreclosures

Ed DeMarco, the acting chief of the regulator for Fannie and Freddie, the Federal Housing Finance Agency, said in a letter to the top Republican and Democrat on the Senate Banking Committee that “after much study,” he has concluded that Fannie and Freddie’s participation in the Obama administration’s program to cut the amount owed by underwater borrowers would “not make a meaningful improvement in reducing foreclosures in a cost effective way for taxpayers.”

“I am concerned by your continued opposition to allowing Fannie Mae and Freddie Mac to use targeted principal reduction in their loan modification programs,” Geithner wrote in a letter in response.

Geithner, the White House and some Democratic lawmakers have been pushing DeMarco to cut the amount underwater borrowers owe for mortgages owned by the two firms, a process known as principal reduction.

Democrats contend that principal reduction would drive the economic recovery because it would give borrowers more money to spend and make it easier for those who have no home equity to sell their homes and move to another city to take a job. Read about internal Fannie documents showing how the firm concluded that cuts to mortgages would help taxpayers
Geithner criticizes decision

Geithner said in his letter that allowing Fannie and Freddie participation in the White House principal-reduction program could help up to half a million homeowners and result in savings to the two mortgage giants of $3.6 billion when compared to other loan-modification programs. Geithner added that the Treasury’s estimate is based on FHFA’s own analysis which was provided to the Treasury.

“In view of the clear benefits that the use of principal reduction by [Fannie and Freddie] would have for homeowners, the housing market and taxpayers, I urge you to reconsider this decision,” Geithner said.

In his letter to Congress, DeMarco said that a key concern with principal reduction is whether borrowers who are current on their loans and have the ability to pay will “claim a hardship or actually become delinquent” to capture the benefits of the program. Read about DeMarco defending not cutting Fannie, Freddie principal

“Even when considering alternatives that might reduce the impact of strategic modifiers and simplify the operational issues, the general result was that the benefits would accrue to few homeowners and would not outweigh the significant costs and challenges to implement a program,” said DeMarco.

DeMarco added that FHFA analysis shows that if 3,000 to 19,000 borrowers who are current on their mortgages decide to default in search of principal reduction, the result would offset any taxpayer benefits seen in a best-case scenario envisioned by the agency. He added that weakening the reliability of the mortgage contract would have “long-term” negative implications to mortgage-credit pricing.

DeMarco added that there are other improvements that can be used to limit losses at Fannie and Freddie and improve the operation of the housing finance market. He said that regulators could further streamline refinance opportunities and expand the short-sale process.

The Treasury in January expanded a program, known as the Home Affordable Modification Program, or HAMP, that seeks to help borrowers on the verge of foreclosure by tripling incentive payments to investors who cut the amount owed by borrowers for mortgages not owned by Fannie and Freddie.

The Treasury also sought to encourage Fannie and Freddie to participate in the program by offering incentives to reduce principal for mortgages owned by the two giants. In response, FHFA conducted another analysis and came to the conclusion Tuesday that mortgage cuts would be costly. Read about the White House expanding foreclosure prevention program

A CoreLogic report from July 12 noted that negative equity and near negative-equity mortgages accounted for 28.5% of all U.S. mortgages in the first quarter of 2012, down from 30% in the fourth quarter of 2011.

Response to the decision on Capitol Hill was mixed, as expected.

“We are five years into the housing crisis, and FHFA remains paralyzed by the fear that somehow homeowners innocently trapped in the worst economy since the Great Depression are going to weasel out of paying every penny on their mortgage that they could,” said Rep. Brad Miller, Democrat of North Carolina.

However, Rep. Scott Garrett, Republican of New Jersey, said he praised DeMarco for his decision to “protect” U.S. taxpayers. “This thoughtful and analytical decision-making process should be used as model for the rest of Washington’s bureaucrats before they make decisions without properly considering the costs and benefits to the taxpayer,” Garrett said.


Ronald D. Orol is a MarketWatch reporter, based in Washington.
Posted by POP-9 Communications at 1:47 PM 2 comments: 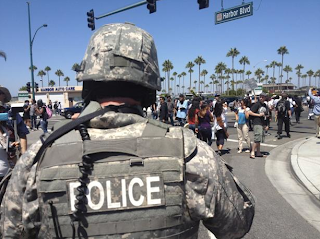 What ever happened to "Protect and to Serve?"  It appears neither the Anaheim PD Chief nor the elected leaders have any control on their police force, who keep showing up like goon squads to confront women and children.  I'd say this community needs counseling...
Posted by POP-9 Communications at 11:08 PM No comments: